Some projects from the last ten years 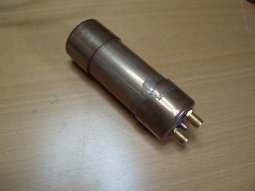 A coupled cavity resonator made from copper water pipe and two end caps. The pipe and caps were bought from a local plumbers' merchant and then drilled to fit the connectors and central resonator. The resonator was cut to give a maximum frequency of just under 1GHz. and a capacitively coupled tuning screw used to adjust the operation to the area of interest. The screw is out of picture on the far end cap. Two female SMA connectors form the input and output connections and there are small loops on the back of them within the body of the cavity that couple energy into and out of the central resonator. This device was used for characterising fluids at high frequency. 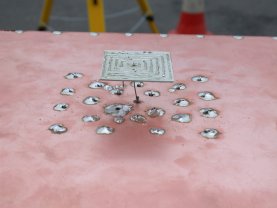 This antenna is designed to operate in a restricted space. It consists of a coiled transmission line formed from a track on a piece of FR4 that is spaced above a ground plane on two vertical radiators. The length of the radiators and PC track determine the frequency of operation and the transmission line is used to transform the low value of radiation resistance of the verticals to a value around 7Ω. 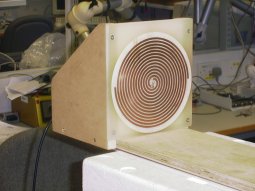 An wideband antenna mounted in a test fixture used for measuring the performance of 868MHz. keyfob transmitters. This is an Archimedian spiral that provided good response up to 4GHz. thus allowing measurement of the fundamental up to the fourth harmonic. A tapered line balun was used to connect a coaxial cable to the antenna. 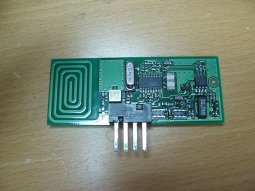 All automotive manufacturers are keen to reduce the current drawn by electronic circuits that operate when the ignition is off. This is a UHF receiver for a central locking and alarm system and it was designed to be placed remotely from the alarm control unit. It consists of a radio receiver section controlled by a PIC microprocessor. The processor comes out of hibernation at a predetermined time, wakes up the UHF receiver and checks the output for recognisable code. If there is only noise present it shuts down the receiver and goes back to sleep. When it recognises the code it holds the receiver on for the duration of the transmission and routes the recovered data out of the connector to the alarm system. The system provided good performance with an overall quiescent current of 600μA. 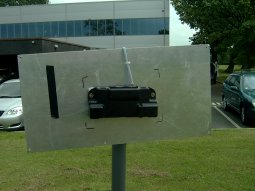 During development of a receiver it is necessary to check the spatial pattern of the antenna. This is a tyre pressure monitor receiver mounted on a metal plate that simulates where the unit is mounted upon the vehicle's bodywork. The experiment has been placed on a open, grassy area to minimise reflections. Not shown is a log periodic antenna that was used to transmit signals to the receiver. The receiver itself is mounted on a rotator so that the pattern of the antenna can be ascertained quickly. 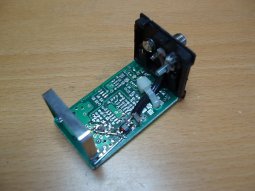 During the development of a tyre pressure monitoring system for a European customer the position of the receiver within the vehicle gave unacceptable performance due to the bodywork and tinted windows attenuating the signal. A series of experimental antennas was designed using an existing keyfob receiver PCB and these were positioned around the vehicle in order to boost the signal to the main receiver. The PCB shows the component positions of the keyfob receiver, most of which were not used. An SMA connector was mounted on the plastic housing and a short length of coaxial cable used to connect it to some matching components. The antenna is a small loop that stands vertically on the PCB at the left hand end. 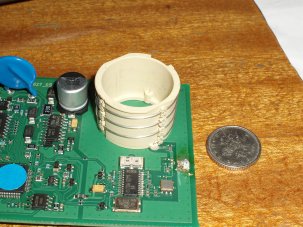 This picture shows a 315MHz. receiver for a tyre pressue monitoring system. The control electronics are to the right of the antenna and the connector is out of picture. The helical antenna was designed by an engineer in the USA for a different product and was used here to save on cost. The receiver section is situated in front of the antenna. A 5p piece is shown to give an idea of scale. 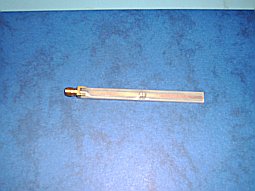 This is a small coil loaded whip antenna for a test jig. It consists of an SMA connector and a length of single sided FR4 PCB with an 1008 surface mount chip coil that adjusted the electrical length of the device to allow operation in the 433.92MHz. region. 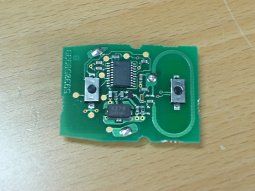 A radio keyfob for an automotive application. Designed for a well known automotive electronics company, this device makes use of the latest IC technology to provide a small size and excellent range. It operates in the 868MHz. ISM band and was qualified for use within Europe. 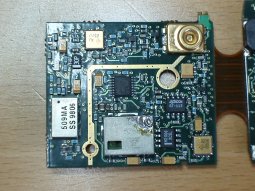 This is one side of the radio section of an analogue mobile telephone designed to operate in the Nordic Mobile Telephone (NMT) band around 450MHz. It is built on a multilayer PCB and uses an integral flexible strip to connect to the main board where the keypad and central processing circuitry were placed. The product was designed to make use of the existing NMT infrastructure in rural areas of Eastern Europe and Russia whilst providing a smaller, more desirable telephone for the users. It never went into production.